Home
Tech Talk
Shopify vs Amazon: all the pros and cons from someone who sells on both 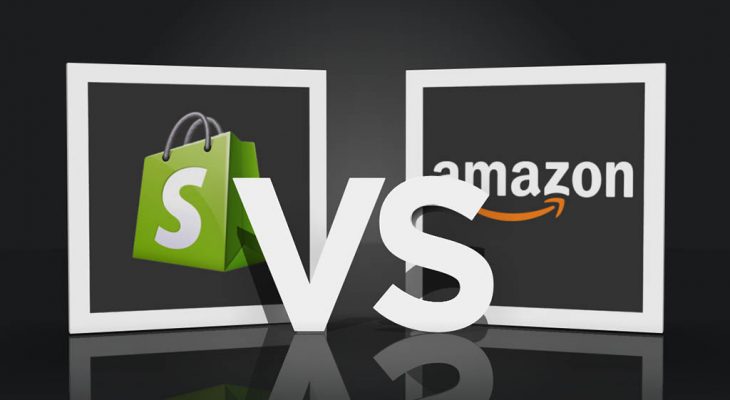 As an online entrepreneur who sells products on with Shopify and Amazon, I’ve got a lot to say about this topic. Get ready to take copious amounts of notes, because I’m about to spew all the pros and cons about selling on Shopify versus Amazon. And more!

For those of you not interested in reading an entire article and you just want to know which one is better, the honest truth is this:

I much prefer selling on Shopify than I do on Amazon. Of course everyone’s situation is different, and the things that I don’t like about Amazon may be the things that you like. Funny how that works, eh?

Anyway, normally I would tell you to try both to see which one you prefer. However, that’s a very time consuming (and somewhat costly) endeavor, so I’m just going to break it down to you as openly and honestly as I can so you can choose the option that’s best for you.

Selling on Shopify vs Amazon: how do they compare?

When it comes right down to it, it’s relatively easy to find success on both Shopify and Amazon. After all, I am just a nobody who is consistently making over $1000 a month selling digital products on Shopify. I also have a book published on the Amazon Kindle store which does fairly well. If I can do it, anybody can.

However, as I’ve already mentioned, there’s a lot about Amazon that I don’t like and I much prefer having my own online store that I built using Shopify. Before I can explain my reasoning for that, let’s take a look at all of the features that both platforms offer in to see how they compare with one another:

As you can see, both platforms are fully capable e-commerce systems. You’ll get loads of great selling tools with each, and it wouldn’t be all that difficult to build an empire on either.

Pros and cons of selling products on Amazon

I think the best way to explain this whole Shopify vs Amazon thing is to break it down into a comprehensive pros and cons list based on my own personal experience. As you’ll see, there are some definite benefits to selling on Amazon. However, there are some very serious drawbacks as well.

Pros and cons of selling products on Shopify

This is the part of this Shopify vs Amazon comparison where I hope to start opening your eyes. Yes, Amazon may seem tempting since it’s the largest and most trusted retailer on the Internet, but as you just read, there are some very serious negatives. Shopify is much better in my opinion, and here’s why:

A brief summary of my (failed) selling experience on Amazon – it’s not as easy as they tell you!

In order to really drive home the point about Shopify being a better solution for most people, I want to share with you the struggles that I’ve had selling an e-book on Amazon. Despite what all the gurus might tell you, it’s hard to make sales. Like, really hard.

I wrote the book back in 2017 as a way to monetize one of my other websites. This particular website was getting a decent amount of traffic and it was slowly (but surely) building an audience. I knew that I could sell copies of my books fairly easily to my existing audience if I could just get it written.

Long story short, I wrote the book over the fall of 2017, and launched it on January 1, 2018. My selling platform of choice was Amazon, and the entire process of getting it online and ready for purchase was fairly painless.

I promoted it to my audience via a blog post and an email and, not surprisingly, I made a few sales. However, sales stopped when I stopped promoting it. I thought for sure that Amazon was going to show it to thousands of potential buyers on a daily basis forever, but that never happened.

Amazon did absolutely nothing for me in terms of showing it to potential buyers, and it has remains buried in the search results since day one. To this day, I have never once had an organic sale from an Amazon customer.

Do I hate selling products on Amazon? No. Could I have generated more sales if I worked really hard to promote it better? Probably. But why would I want I have to work so hard to drive traffic to someone else’s website?

Build your own business (not someone else’s) with Shopify

Once I made the realization that it was going to be extremely difficult to get organic sales of my products on Amazon, it made me appreciate the process of building and creating a Shopify store even more. It was a no brainer, especially considering all the great marketing tools that are available for driving traffic to a Shopify store.

Basically, whether you use Shopify or Amazon, it’s going to take lots of work to get sales. And I don’t know about you, but if I’m going to spend a lot of time and effort on something, it better be on something that is going to benefit me for the long run – and not somebody else.

Focusing my efforts on building an e-commerce store that I own protects me from annoying things like algorithm and site structure changes. I never have to worry about waking up to a scary email informing me that my account has been banned for seemingly no reason.

I own my Shopify store. I feel great knowing that all the effort and time that I put into it won’t be obliterated in an instant due to something that I have no control over.

Why would you choose Amazon over Shopify?

Even though I feel like I’ve done a pretty good job of pooping on Amazon in this article, I don’t deny that there are some real benefits for going that route. I’ve already mentioned some of those in the pros and cons list above, but here are two other reasons why Amazon may be a better fit for you and the products that you sell:

Why would you choose Shopify over Amazon?

There are lots of good reasons. The fact that you’ll be in 100% control of your store is the biggest one, as is the ability to build relationships with your customers. Additionally:

Finally, I’d also like to mention that GumRoad is an alternative to selling on Amazon as well. As a matter fact, I even wrote a full article comparing Gumroad to Shopify a short while back, and I highly recommend reading that to find out about selling your own products online without making Jeff Bezos even richer.

Longtime followers of my blog know that I’ve been struggling with social media for a very long time. …
Read More

I’ve been very much looking forward to writing this Gumroad review for a long time now, as I’ve …
Read More

Before saying anything else, you have to know that I suck at math. Not only did I never …
Read More

Hey there! My name is Scott, and I am a full time content creator who successfully traded a corporate paycheck for passive income and financial independence.

TraderScooter.com is my online entrepreneurial journal where I talk about the things that I'm doing to help me reach my goals (as well as sharing things that I learn along the way).