Home
Entrepreneur Talk
I did it! I quit my six figure corporate job to be a full time blogger. 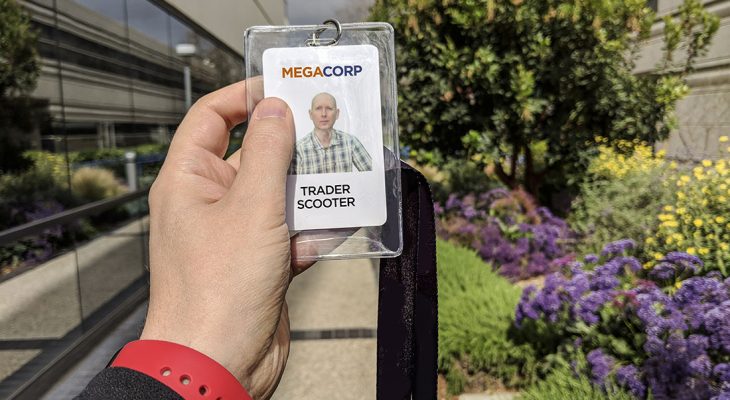 Back when I started this blog in 2013, I was 17 years into a soul crushing corporate career that I desperately wanted out of. I’ve been lucky enough to have been in some very well-paying positions throughout my career, and in April of this year I was making approximately $130,000 annually in take-home pay. That didn’t include all the income from my side hustles, so it goes without saying that I had feeling very comfortable financially for a while now.

But as the saying goes, money doesn’t buy happiness. As a matter fact, I knew within two weeks of graduating college in the spring of 1996 that the corporate life just wasn’t for me. Of course it was far too late to turn the ship around and do something different, since I had just spent four years attending a very expensive college and I just couldn’t see myself throwing away all that effort in the blink of an eye like that.

I was in it for the long-haul, and I knew that I was just going to have to suck it up and be thankful for having a degree and a very well-paying job at such a young age.

Unfortunately, nobody ever told me that working a 9-to-5 job would be so soul crushing. I had been raised to believe that going to school and getting good grades (so that I could get a good job and make a lot of money) was the key to happiness and a successful life. It wasn’t until I was living that life that I realized it was total bullshit and I needed to find a way out – desperately.

It was early 2006 when I began experimenting with different ways to earn a living (that didn’t involve a 9-to-5 job) and I quickly discovered that creating and selling stock photography was a very lucrative way to make money in my spare time. Over the course of the next four years, I poured everything I had into it and made $100,000. I thought that I was on my way to financial independence, but I felt like I had done all I could do with that and that there were better ways to make money online.

I experimented with swing trading for a while, and I did make decent money, but I didn’t like the risk involved and I eventually got out 2015 after a very bad trade that nearly wiped out my savings. It was completely my fault, I know, and I realized that I needed to find a business that was sustainable and profitable for the long-haul.

I begin focusing more heavily on blogging that point, and at my peak I was maintaining nine blogs at once. It was a lot of work, but it felt very satisfying to me and I really enjoyed watching my traffic grow month over month. I wasn’t so focused on making money with those blogs in those early days, as the most important thing was to create content and get it to rank well within Google.

The monetization portion of it would come later. Stupid me – the least I could have been doing was affiliate marketing using shareasale.com or something in order to get some money coming in.

Back in early March of this year, I was sitting at my desk at work when an email popped up announcing that there would be layoffs happening soon, and that they were looking for volunteers before they started the process of determining who would need to leave the company.

For someone like me who had been feeling burned out for years, constantly dreaming about being self-employed, this was a very intriguing opportunity and my mind immediately began to race thinking of all the glorious possibilities.

The email stated that all volunteers needed to notify their managers their decision within three days, so I had some time to think about what I was going to do. Volunteering to be laid off meant that a severance package would be included, and since I had been with the company for 14 years, mine would be pretty sweet.

Because of that, my initial gut reaction was that I was going to volunteer, take that severance package, and run like the wind.

However, it didn’t take long for reality to set in. Yes, I already had a handful of established blogs that were bringing in a decent amount of traffic every day. The problem was that I had done very little in terms of monetizing them and they weren’t bringing in very much income.

I was only averaging about $1000 a month at that point (from selling digital products on Shopify) which might seem like a lot to some, but it was very far from the $130,000 a year salary that I had been accustomed to for so long. Volunteering to be laid off meant that I was in for a major lifestyle change, which was enough to keep me reaching for the Tums as I pondered the decision.

I kept flip-flopping between the thought of how great it would be to be my own boss and to control my own destiny, and also how foolish it was to walk away from such a high-paying career at 44 years of age. I’m no spring chicken, and a huge financial mistake now could very likely affect me for the rest of my life.

Making a decision and sticking to it

As you probably guessed by the title of this post, I ended up volunteering and my last day as a corporate employee was May 4th. I have been self-employed for just over a month now, and the good news is that I’m not regretting that decision at all and I’m still very excited for what the future may bring.

However, The reality is is that I’m still only generating about $1000 a month in income from digital product sales (and not much else), which is very far from my goal of $10,000 a month. It’s going to take an incredible amount of work to get to that level, and I am not going to lie when I say that I still have my doubts as to whether or not I can make this work.

The good news is that I have a bit of time to figure all of this stuff out, as my severance package will keep me going for a while so I’m not going to have to worry about paying the bills – at least for another year or so. After that, who knows?

The fact that I’m writing this post is a huge milestone, for the simple fact that my entire reasoning for starting traderscooter.com in 2013 was to document my path towards becoming self employed and financially independent. Well, I’ve reached the self employed portion of it, and now I’ve got no choice but to make the financially independent part work.

Given the fact that I have nearly a year to sit here and do nothing but work on my blogs and focus all my attention on monetization efforts, I do believe I can get there. After all, it’s not like I’m starting from scratch. Several of my blogs bring in a decent amount of traffic every day with fairly engaged audiences, and that’s really nice because just getting to that point takes a ton of work – and I am already there.

Having already been self-employed for over a month now, I realize what I’m up against and what it’s going to take to reach my $10,000/mo goal. My primary focus for the time being will be doing affiliate marketing through shareasale.com, as well as continuing my digital product sales on Shopify. I’ll be posting my progress here on traderscooter.com for all to see, and I hope it will be educational and inspiring whether I succeed or fail.

It’s easy to fall into the trap of trying to make as much money as possible, but having …
Read More

Selling stock photography is a topic that is near and dear to my heart. I started way back …
Read More

The benefits of running your own online business are numerous – you can work from home, you are …
Read More

Hey there! My name is Scott, and I am a full time blogger who successfully traded a corporate paycheck for passive income and financial independence. TraderScooter.com is my online entrepreneurial journal where I talk about the things that I'm doing to help me reach my goals, as well as sharing things that I learn along the way.